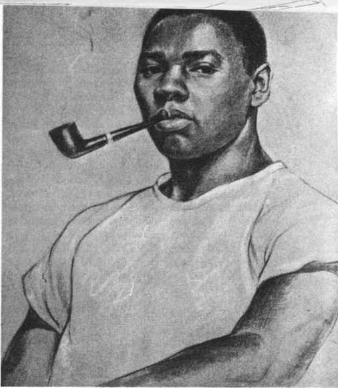 Elton Clay Fax was an award-winning illustrator, writer, painter, educator and cartoonist who received many awards throughout his career, including a Rockefeller Foundation fellowship (in 1976) and a Chancellor’s Medal from Syracuse University (in 1990).

Born on October 9, 1909, in Baltimore, Maryland, Elton Clay Fax was the son of Mark Oakland Fax, a clerk, and Willie Estelle Fax, a seamstress. After graduating from college, Fax began to emerge as a budding young artist around Baltimore, winning a gold medal  from the Baltimore Women’s Cooperative Civic League in 1932. In 1935, Elton Fax taught art classes at Claflin College but soon left to work for the Works Progress Administration (WPA) in New York City. There he studied with Augusta Savage, who had been teaching art in Harlem since 1929 and was a mentor to Norman Lewis, William Artis, Ernest Crichlow and Robert Blackburn among others. Later, he served as a faculty member at Harlem Community Center (HCAC) alongside artists Henry Mike Bannarn, George Barina, Selma Burke, Sargent Johnson, Riva Helfond, Norman Lewis, and Vlaclav Vytlacil.  He had also taught at the City College in New York and held residencies at Purdue University, Princeton University, Fisk University, Western Michigan University, University of Hartford, and Texas Southern University.

In 1940, he became a freelancer and illustrated for magazines, children’s books and so on. He simultaneously started performing chalk-talks for the New York Times Children’s Book Program and producing a weekly series comic strip called Susabelle.

In 1959, Fax made his first trip to West Africa as a participant in the United States’ Educational Exchange Program, along with John Biggers and Henry Ossawa Tanner. In the following decades, Fax would continue to travel around the world, giving chalk-talks and documenting what he saw in places like Ethiopia, Nigeria and Northern Sudan. The theme for his lectures was often based on political topics connected to civil rights activism in the United States. From 1971 to 1973, Fax was a guest of the Soviet Writers’ Union and in 1982, when he was a guest of the Bulgarian Writers’ Conference, he shared a platform with celebrities such as John Cheever, William Saroyan, and Gore Vidal.

His work has been exhibited in many museums, including the National Gallery of Art and Corcoran Gallery of Art, Washington, DC; Kerlan Collection, University of Minnesota; and National Museum, Tashkent, Uzbekistan. He has also published many books about the African-American experience. Seventeen Black Artists (1971) won the Coretta Scott King Award. Garvey (1972) is a biography of the black nationalist Marcus Garvey, best known for his declaration: “Africa for the Africans.” Through Black Eyes (1974) details his journeys to East Africa and the U.S.S.R. Fax is listed in “Who’s Who in American Art;” “Who’s Who in the East,” and Roslyn Walker’s “A Resource Guide to the Visual Arts of Afro-Americans.”

Previous Next
View All